Burlington – State Agency officials, representatives from the Vermont Foodbank, and local grocers joined together at the Chittenden Emergency Food Shelf to recognize the contribution of food rescue to hunger relief.  Since July 2015, when requirements for food diversion took effect for medium-sized institutions under Vermont’s Universal Recycling Law, the Vermont Foodbank has seen a 24% increase in food donations from retailers over last year.  Food shelves are fuller, and less waste is going to the landfill.

“Food rescue from Vermont retailers and producers is the Vermont Foodbank’s biggest priority. The increases in the amount of food we’ve been able to rescue over the past year have enabled us to increase the variety of fruits and vegetables we distribute to network partners and directly to clients  and better serve traditionally underserved areas of the state including the Northeast Kingdom and Rutland County. From the Foodbank’s perspective, it’s clear that the law is gaining momentum statewide and we expect to see increased conversation lead to increased donations,” said John Sayles, Vermont Foodbank CEO. 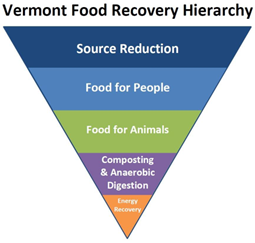 “This is a wonderful result of getting the word out about the July 2015 recycling and food recovery deadline,” said Agency of Natural Resources Secretary Deb Markowitz.  “By joining efforts with hunger relief organizations we can get the food out of the landfill and into the hands of those who need it, while saving money for retailers.”

Vermont is the first state in the nation to adopt a food recovery hierarchy, placing a priority on the reduction of food waste.  After waste reduction, the priorities for food diversion in order of importance are food for people, food for animals, food for composting, and food for energy production.  By donating edible food to food rescue organizations, Vermont businesses deliver on a triple bottom line – economic, environmental, and social benefits.

Hunger insecurity continues to be a problem in Vermont.  Nearly 13% of Vermont families face food insecurity, a 4% increase since 2001.  Approximately 18,700 Vermonters access food from the Vermont Foodbank in a typical week and 153,000 people (24% of the population) are served annually.

The Farm to Plate Network praised the collaboration among partners that has led to the sharp increase in food donations.  “The Universal Recycling Law has created partnerships between food retailers and hunger relief organizations that did not exist before.  The food recovery movement is expanding with new energy and new opportunities,” said Jake Claro, Farm to Plate Network Manager.