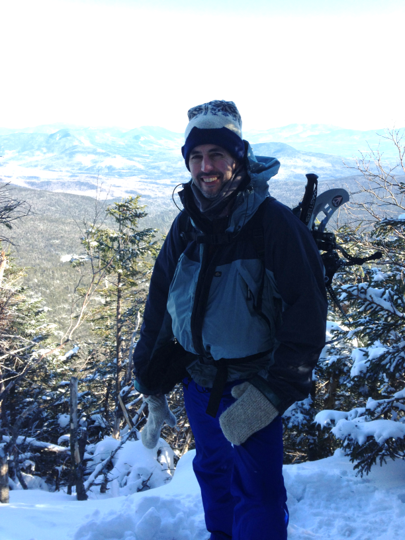 Josh Kelly wants every Vermonter to think twice before they toss out that apple core. In a state that prides itself on Yankee ingenuity, Josh and his team are busy capitalizing on Vermont’s strong waste not ethic to keep food scraps and recyclables out of the garbage can.

“It bothers me to throw stuff away. I’m all about helping people give new life to trash,” Josh says. He works with a team of Department of Environmental Conservation staff to build a statewide culture of composting and recycling. Before starting with the Department, Josh worked in land conservation for seven years. When the 2009 recession hit, he had to find a new job and jumped at the opportunity to reinvent himself. He followed his other environmental interests and passions and landed a job with the Highfields Center for Composting in Hardwick. In his new role, he had the monumental task of developing a statewide composting initiative well before the Universal Recycling Law (Act 148) went into effect in 2012.

“Composting on a bigger scale was still somewhat of a new concept for people. It wasn’t an easy job but there were signs of progress along the way. I forged early partnerships with solid waste districts and a few haulers and supported farms like the Hudak Farm in St. Albans and Bob Sandberg’s farm in Corinth to start up composing operations. Together, we were helping to shape Vermont’s initial composting infrastructure, most of which is still operating today. Soon, it didn’t seem like such a far-fetched idea because so many communities were buying into it.”

After the Universal Recycling Law passed, Josh took a job with the Department to assist with implementing it. Nearly five years later, Josh is still inspired everyday by the positive environmental change taking place.

“With this roll-out we’re working closely with solid waste districts and alliances and they’re engaged in critical recycling and composting education and outreach.  So it’s great to partner with them to get the word out and it’s working.  Over the past two years trash disposal has fallen 8.5%.”

Josh is also encouraged by the progress he’s seen Vermont make to get wasted food and food scraps out of the trash. “We’re seeing so many ancillary benefits. We were finding that good food was being thrown in dumpsters. It was food that people could’ve eaten and there was lots of it. Now that’s starting to change and credit goes to the Vermont Food Bank and their partner food shelves who’ve increased food donations from places like Hannaford’s and Cumberland Farms. The Vermont Foodbank estimates that rescued food has more than doubled since the Universal Recycling law began to take effect.”

When it comes to the future of composting, Josh is optimistic. He’s continually impressed by “organics entrepreneurs” – the people hauling food scraps, managing it, and looking for opportunities to repurpose it. “It’s remarkable the commitment composters and food scrap haulers have and I’m always interested to see new people entering the space,” he adds.

He’s also enjoyed the growing relationship he and his team have forged with business owners. “We’re engaged in direct business outreach and the results are really positive. Employees are glad to have us help them get recycling and composting programs going at their business. They feel a sense of pride from doing it.”

Finally, he’s energized by and has full confidence in today’s young people to grow and sustain a robust composting culture. “I’m inspired by the young people who aren’t afraid to say this makes sense. In the face of a lot of apathy, stigma, and challenges, they’re confident they can figure out how to make it work and they’re committed to finding a way. The challenges are real, but not insurmountable.”